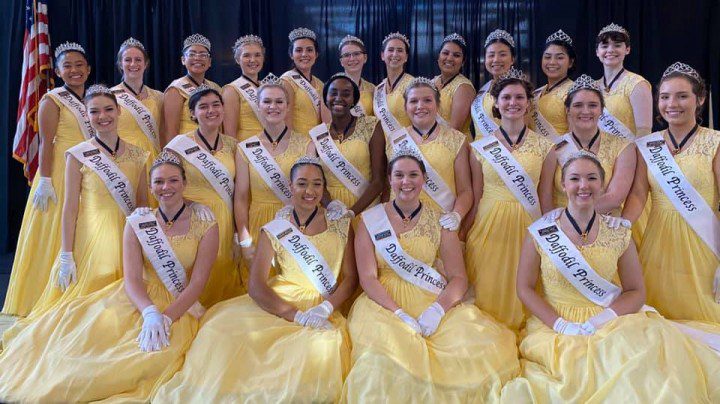 The 2020 Royal Court in a smiling group photo at last year’s Princess Promenade event.Out of the prominent Festival events in the Daffodil calendar year, none is quite as inscrutable to the outside observer as Princess Promenade. While the Grand Floral Parade is not only steeped in public tradition, but also generally easy to understand as a concept – with the same being said for the Queen’s Coronation – there is not a lot to parse out based simply on Promenade’s name.

So, what, exactly, is Princess Promenade?

Then again, it’s not all about these accomplished young ladies, either. For their families, it’s an opportunity to see their daughters recognized for their achievements on a grand stage, for the work they put into not only the titles, but the hours they dedicate to their education, their extracurriculars, their communities, and more. Promenade also affords official Daffodil Festival representatives – called Daffodilians – their first introduction to the young leaders of the organization for the next Festival season.

Demetria Zuniga is one of the Festival’s official Directors of Royalty. For her, the event has always carried a palpable feeling of anticipation.

“As an audience member, there is such great expectation and excitement of what is to come. As a mom, you can’t wait to see the transformation of your little girl into an official Princess. As a Daffodilian, the excitement is still there! It is the official start to a new year with the Princesses representing the Festival!”

Promenade also marks a time when the Royalty Directors – a title currently co-held by Zuniga and Judy McBeath-Smith, who both became involved with the Festival after their respective daughters’ involvement in the Royalty program – begin to see their hard work pay off.

Because truly, what you see at Promenade as an audience member, is already the culmination of months’ worth of practice… more specifically, Princess Practices.

After individual school Princess Selections occur in October and November, the Princess candidates are thrust into a quick schedule of practices that take place on the weekends through December, January, and February. During these sessions, they not only have the opportunity to connect with and get to know the other members of the Royal Court from towns they may never have even heard of before, but they also learn the ins and outs of what, exactly, it means to represent not only the Festival, but this myriad of communities, too.

Lesson plans are as varied as learning a song-and-dance number to perform at official events, to recounting Festival history, and taking part in leadership and confidence-building activities. Princesses may host guest speakers, including local dignitaries and prominent members of the community, as well as gain important public speaking knowledge, which is especially vital, considering the number of times Princesses might find themselves engaging with the public in front of a microphone.

These Practices are also where they are bestowed the typical trappings of Princess attire, including shoes, tiara, jewelry, sash, as well as that year’s iteration of the iconic yellow gown, by which the Daffodil Princesses have been locally identified for over nine decades. More importantly, they are also taught how to fit all these pieces together into a cohesive Princess look… which is no easy feat, when Princesses might be expected to make quick changes during car rides, after school, or running from extracurriculars or sports practices to an official event.

The night of Promenade is not only their big entrance onto the Festival scene, but their first opportunity to put all these lessons together. Moreover, it’s the first time they’re expected to do so in front of anyone else.

For McBeath-Smith, witnessing this personal growth among the ranks of the Royal Court makes for some of her favorite aspects of the Royalty Director title.

“From their Selection night to Promenade evening, watching the transformation of the Princess Candidates is so rewarding! It’s a joy to help these smart young ladies grow into Daffodil Princesses.”

It shouldn’t be a surprise to know that Promenade might be one of the most nerve-wracking events of the Festival season for the Royal Court. While these young ladies have been carrying the mantles of their school since their official Selections back in the Fall, Promenade marks their first chance to really step out and represent. At the same time, it is also their opportunity to finally show off what skills they have been developing in secret for months.

Of course, this is all what happens during a typical calendar years’ worth of Daffodil Festival events. Due to last year’s March shutdown, many of the biggest events for the 2020 Court, like the Queen’s Coronation and the Grand Floral Parade, had to be completely scrapped. The Selection season for the 2021 Court was severely truncated due to the difficulties of hosting virtual events with each school’s candidates, and didn’t happen in the Fall as usually planned, but instead, just this past January. The Princess’ Practice sessions were two-a-week for over a month, and the Festival has been forced to contend with serious alterations to events that would otherwise be taking place in person and, typically, on a stage.

Unsurprisingly, things are going to look a little different for the 2021 Court’s Princess Promenade.

The invite list is both more limited than usual, and more inclusive than ever before: instead of renting the Pioneer Park Pavilion in Puyallup and granting tickets to Royal Court families, school representatives, Daffodilians, and more, Promenade will be hosted as a closed event, taking place at Farm 12 in Puyallup, open only to the Princesses and necessary Festival heads. However, it will also be live-streamed via the Festival’s Facebook page, allowing a public access never experienced with this event.

Still, the more things change, the more things stay the same. 2021 Festival President Ernie Ouellette will read a speech and explain the choice of this year’s theme – “Reach for Your Star!” – and the Princesses will still be introduced with their names and high schools.

The official Daffodil sword, an antique piece that makes limited appearances in a Festival year, will still be available for Princess shoulder-tapping. Whereas the direction of the event is typically one honoring a sense of local history and community-wide celebration, this year, the focus will be more on bringing the Festival back into gear after a year of stagnation, and making the Royal Court feel recognized as members of the community at a time when many still feel all-too socially distanced.

Even though the rules have changed, the Court is still ready to give it their all, officially stepping into their places as the Princesses of the 2021 Daffodil Festival season.

Zuniga and McBeath-Smith will be right there with them, cheering them on. Zuniga sees their efforts from the lens of not only Festival representatives and supporters, but something closer to a family tie.

“As Directors of Royalty, second Moms… we are beyond proud of these young ladies!”