History of the Festival

Daffodils came to the Puyallup Valley around 1925 to replace the area’s dying hop industry. The U.S. Department of Agriculture recommended bulb growing because of the Valley’s excellent soil and ideal climate. About 200 varieties of Daffodils are grown, with the King Alfred being best known and most locally grown. 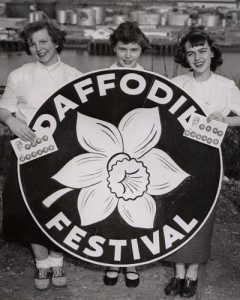 Origin of the Daffodil Festival 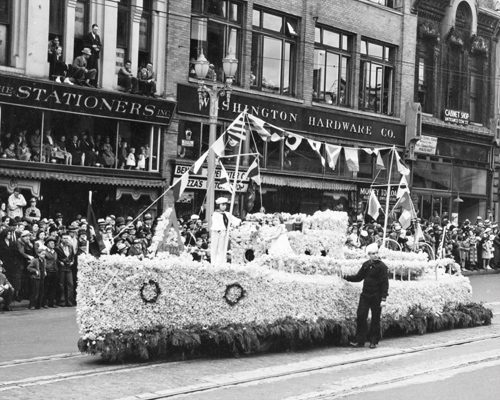 A float traveling through downtown Tacoma in 1936.

The Daffodil Festival, for all intents and purposes, began on April 6, 1926 when Mr. and Mrs. Charles W. Orton were hosts to civic leaders from 125 towns in Western Washington. The Orton's lived in rural Sumner and opened up their home for a garden party. The garden party was arranged so the guests could see the many varieties of daffodils in bloom, in and around their estate. Among the many guests were the mayors from Seattle and Tacoma. Major General Robert Alexander, a Commander at Fort Lewis, brought a military band and a group of officers and their ladies from the Army post. After this first garden party, the event became an annual affair.

Year after year, interest grew, (along with the ever expanding daffodil fields) until 1932, at which time "Bulb Sunday" came into being. The viewing of daffodils in bloom became fashionable, and, unfortunately created a massive traffic problem for Puyallup, Sumner and Orting, as up to 8,000 vehicles crowded the roads bordering the golden fields. No doubt, automobiles and owners were also vying for attention. The calamity of this congestion also brought a halt to "Bulb Sunday."

1934 was to become "Parade Year." Well-known Tacoma photographer and first secretary of the founding group, Lee Merrill, suggested that the daffodil blooms, which at that time were thrown away or used as fertilizer, be used instead as decorations for a Festival Parade. Automobiles were decorated with daffodils, bicycles followed in like-fashion and together they all paraded through the neighboring valley towns. A mounted contingent of the finest riding horses in the area appeared each year.